The Captain of Morgan County 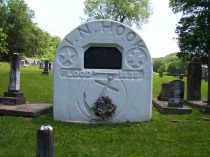 Did you know that Stockport, Ohio was once the home of a famous riverboat captain? Yes, his name was Captain Isaac Newton Hook (1819-1906). He roamed the corridors of the Muskingum River during the 19th century.

During the Civil War, Hook used his boating skills which he learned on the Muskingum River to ferry needed supplies for the Union army.

Captain Hook's grave is located in the Old Brick Cemetery in Stockport, Ohio off State Route 376, heading north towards the historic village of McConnellsville.

Visitors to the Captain's grave will notice that his tombstone has a rounded top. Why you might ask?

Well, legend has it that the Captain once heard his wife say that when he died, she would be the first to do a dance of joy on his tombstone.  Hearing that, the Captain arranged to have the top of the tomb curved so that it would not lend itself to being a platform for anyone wanting to dance on his grave. And so he had the last laugh.

The Stockport Mill Inn named many of its rooms after local riverboat lore and legends. A suite on the fourth floor of the facility is dedicated in memory of Captain Hook.